TORONTO, July 29, 2021 /CNW/ - Denison Mines Corp. ("Denison" or the "Company") (TSX: DML) (NYSE American: DNN) is pleased to provide a progress update on the In-Situ Recovery ("ISR") field test activities occurring at Phase 1 of the high-grade Phoenix uranium deposit ("Phoenix") at the Company's 90% owned Wheeler River Uranium Project ("Wheeler River" or the "Project"). The Company is also pleased to announce the discovery of additional high-grade uranium mineralization, including 22.0% eU3O8 over 8.6 metres in drill hole GWR-045, located outside of the existing high-grade resource domain associated with Zone A and Phase 1 of the phased mining approach currently planned for Phoenix. View PDF

David Bronkhorst, Denison's VP Operations, commented, "We are pleased to have safely and successfully completed a substantial portion of the planned 2021 ISR field test program – including the installation of the commercial-scale wells in our five-spot test pattern ("Test Pattern") and nine of eleven planned monitoring wells. Baseline hydrogeologic testing and permeability enhancement efforts completed within the Test Pattern thus far are encouraging and will inform future test work as we progress towards the initiation and completion of a full-scale tracer test during the remainder of the program.  The tracer test is planned to be completed during the third quarter and is expected to provide a more complete understanding of the operating parameters in Phase 1 and important information in support of our objective of permitting and completing a lixiviant test in 2022 – which is considered a key de-risking milestone for the project.

Additionally, the discovery of a thick interval of high-grade uranium mineralization in GWR-045 is quite exciting, as it has the potential to meaningfully increase the high-grade mineral resources estimated within the area currently expected to represent the first phase of ISR mining at Phoenix."

Interim progress highlights from the 2021 ISR field program include the following:

Once the final two MWs are completed, the Test Pattern will be ready for additional hydrogeologic test work, including the following planned activities:

All test work in 2021 will be conducted using site groundwater. Following the field tests and associated data collection, detailed hydrogeological and geochemical modelling of the test data will be carried out by various Qualified Persons ("QPs").

The Company is committed to ensuring that the Wheeler River site is a safe operating environment for its staff and contractors and that the Company's field activities do not compromise the health and safety of the residents of northern Saskatchewan.  In 2020, the Company's Occupational Health and Safety Committee in Saskatoon developed a comprehensive guide for the safe resumption of work at Wheeler River.  The protocols consider the unique health and safety risks associated with operating a remote work camp amidst the ongoing COVID-19 pandemic.  Public health guidelines and best practices (including testing) have been incorporated into the Company's protocols.

Despite the Company's current intentions, it is possible that the 2021 ISR field program may be disrupted by the continuously evolving social and/or economic disruptions associated with the COVID-19 pandemic, which are outside of the control of the Company – for example, provincial or local travel restrictions, or changing public health guidelines, could impact the ability of Company or contractor staff to attend to
the site.

Use of Radiometric Equivalent Grades

The Company typically reports results as preliminary radiometric equivalent grades ("eU3O8"), derived from a calibrated downhole total gamma probe, during active exploration programs and subsequently reports definitive assay grades following sampling and chemical analysis of the mineralized drill core. In the case where core recovery within a mineralized intersection is less than 80%, radiometric grades are considered to be more representative of the mineralized intersection and may be reported in the place of assay grades. Radiometric equivalent probe results are subject to verification procedures by qualified persons employed by Denison prior to disclosure. For further details on the total gamma downhole probe methods employed by Denison, QAQC procedures and data verification procedures please see Denison's Annual Information Form dated March 26, 2021 available on Denison's website and under its profile on SEDAR and EDGAR.

A Pre-Feasibility Study ("PFS") was completed for Wheeler River in late 2018, considering the potential economic merit of developing the Phoenix deposit as an ISR operation and the Gryphon deposit as a conventional underground mining operation.  Taken together, the project is estimated to have mine production of 109.4 million pounds U3O8 over a 14-year mine life, with a base case pre-tax NPV of $1.31 billion (8% discount rate), Internal Rate of Return ("IRR") of 38.7%, and initial pre-production capital expenditures of $322.5 million. The Phoenix ISR operation is estimated to have a stand-alone base case pre-tax NPV of $930.4 million (8% discount rate), IRR of 43.3%, initial pre-production capital expenditures of $322.5 million, and industry leading average operating costs of US$3.33/lb U3O8.  The PFS is prepared on a project (100% ownership) and pre-tax basis, as each of the partners to the Wheeler River Joint Venture are subject to different tax and other obligations.

Denison is a uranium exploration and development company with interests focused in the Athabasca Basin region of northern Saskatchewan, Canada. In addition to the Wheeler River project, Denison's interests in the Athabasca Basin include a 22.5% ownership interest in the McClean Lake joint venture ("MLJV"), which includes several uranium deposits and the McClean Lake uranium mill that is contracted to process the ore from the Cigar Lake mine under a toll milling agreement, plus a 25.17% interest in the Midwest Main and Midwest A deposits, and a 66.90% interest in the Tthe Heldeth Túé ("THT," formerly J Zone) and Huskie deposits on the Waterbury Lake property. The Midwest Main, Midwest A, THT and Huskie deposits are located within 20 kilometres of the McClean Lake mill. In addition, Denison has an extensive portfolio of exploration projects covering approximately 280,000 hectares in the Athabasca Basin region.

Denison is also engaged in mine decommissioning and environmental services through its Closed Mines group (formerly Denison Environmental Services), which manages Denison's Elliot Lake reclamation projects and provides post-closure mine care and maintenance services to a variety of industry and government clients.

The technical information contained in this release has been reviewed and approved by Mr. David Bronkhorst, P.Eng, Denison's Vice President, Operations and Mr. Andrew Yackulic, P. Geo., Denison's Director, Exploration, who are Qualified Persons in accordance with the requirements of NI 43-101.

Certain information contained in this news release constitutes 'forward-looking information', within the meaning of the applicable United States and Canadian legislation, concerning the business, operations and financial performance and condition of Denison.

In particular, this news release contains forward-looking information pertaining to the following: the planned scope, elements, and objectives of the 2021 ISR field programs, including the drilling of CSWs and MWs and development and objectives of the Test Pattern; other evaluation activities, including a planned future lixiviant test; the results of the PFS and expectations with respect thereto; expectations with respect to phased development, and the estimates of reserves in each such phase; other development and expansion plans and objectives, including plans for an environmental assessment and a feasibility study; and expectations regarding its joint venture ownership interests and the continuity of its agreements with its partners.

Forward looking statements are based on the opinions and estimates of management as of the date such statements are made, and they are subject to known and unknown risks, uncertainties and other factors that may cause the actual results, level of activity, performance or achievements of Denison to be materially different from those expressed or implied by such forward-looking statements. For example, the modelling and assumptions upon which the work plans are based may not be maintained after further testing or be representative of actual conditions within the Phoenix deposit.  In addition, Denison may decide or otherwise be required to discontinue its field test activities or other testing, evaluation and development work at Wheeler River if it is unable to maintain or otherwise secure the necessary resources (such as testing facilities, capital funding, regulatory approvals, etc.) or operations are otherwise affected by COVID-19 and its potentially far-reaching impacts.  Denison believes that the expectations reflected in this forward-looking information are reasonable but no assurance can be given that these expectations will prove to be accurate and results may differ materially from those anticipated in this forward-looking information. For a discussion in respect of risks and other factors that could influence forward-looking events, please refer to the factors discussed in Denison's Annual Information Form dated March 26, 2021 or subsequent quarterly financial reports under the heading 'Risk Factors'. These factors are not, and should not be construed as being exhaustive. 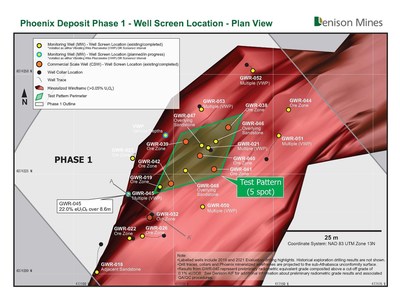 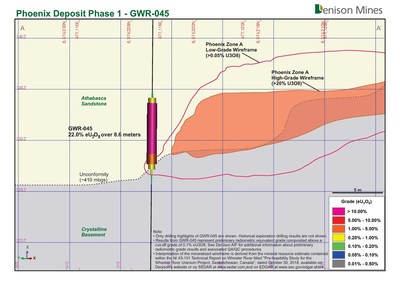 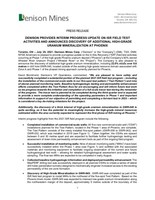